Czech composer and famous violinist, often compared to Paganini. Son of a teacher and musician Antonin Slavik, who started to teach him violin in the age of 4. In 1815 the family moved to Horovice. In the local castle a lot of musical performances were held; young Slavik was warmly welcome there in his age of 10. His talent was noted by the Earl Eugen Vrbna who was the member of the Society for Support of Musical Arts in Prague. He took the boy to Prague to pass the entrance exam at the conservatory. Slavik studied there for 7 years supported by Earl Vrbna. His main subject was violin under professor F.V.Pixis. After finishing the studies in 1823 he got into the orchestra of Stavovske Theatre as violinist. Besides he started to perform individual concerts and write his own compositions. At that time he got acquainted with Paganini's works which encouraged him to further work. In 1825 he left to Vienna where he applied for the position of the member of the imperial orchestra. After successful individual concerts, he was engaged as a voluntary member (i.e.unpaid). That was why he had to make his living by teaching violin and performing solo concerts. In his age of 20 he got reputation as a brilliant player who could play the most difficult parts but some reviewers found a lack of sensitivity in his performance. On the occasion of Paganini's concerts in Vienna, Slavik managed to meet Paganini in person and show him some of his skills. He got not only valuable piece of knowledge but also appreciation and encouragement from Paganini. In 1828 he successfully performed in Bratislava; after the concert, the reviewers called him one of the biggest violinist of that time. In 1828-29 he spent half a year in Paris but he was not welcome by the musical society which did not enjoy the competition. After his return to Vienna he received full membership in the Imperial Orchestra which meant financial security for him. In Vienna he met F.Chopin and F.Schubert who both thought higly of him; Schubert dedicated his Fantasy in C Major to him. In his age of 25, Slavik is regarded as Paganini's successor. In 1833 he had his last concert in Vienna before the on-coming big tour to Hungary. The concert was his biggest success so far; unfortunately, he suffered from influenza and played in a fever. Shortly after his arrival to Budapest, the fever came back and Slavik died in his age of 27, long before the possible peak of his interpretation and composition skills. 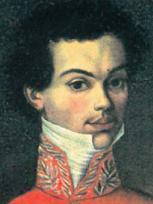