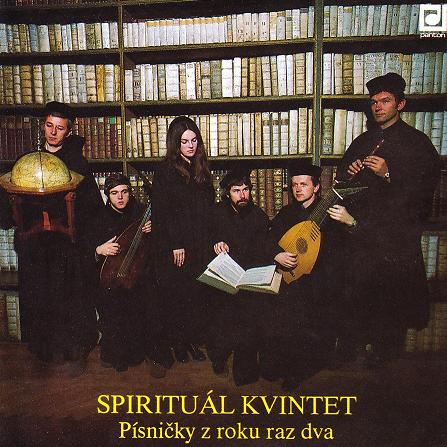 cover of the first album

the oldest and one of the most famous Czech folk bands. Unlike its later branch "Brontosauri" (band of Nedved brothers), it always safely keeps within the bounds of good taste. Particularly the first recordings belong to the best in its genre in Czechia. The original band name was Spiritual Quartet; with the decision to adopt a female singer the name was changed from quartet to quintet, though later the number of musicians was still changing. The early repertoir was mostly spirituals and gospels sung in English or Czech; later the repertoir got wider, e.g. by renaissance music (see album Pisnicky z roku raz dva), Czech national songs (Sibenicky) or music of Czech National Revival (Sauzeni lasky). Album Na kare is a comeback of some of the original members.